the sounds of architecture

This is the ninth in a series of guest posts written by some of my favorite bloggers. To understand what this is about, you can read this post: http://bit.ly/90Sss3

This one in particular was written by the kind and creative Antony DiMase. Antony is a Melbourne architect with interests in design, day-dreaming, the arts, people, ideas, federal politics and the environment. He thinks Design = Change! Antony may also be found on Twitter @Antony_DiMase . 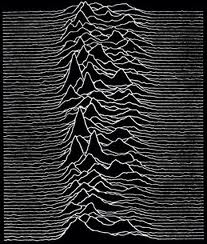 “It starts out no more than a bit of noodling but the melody gets hold of him. He settles into the chord progression and feels himself begin to relax at the feel of frets underhand, the way the tune offers itself up for elaboration at every turn, and when he completes the cycle he can’t leave off, he has to go again, this time with confidence, with a little more tapestry. The air plays itself out but still he can’t let go. He segues into a blues rag in the same key, just for a change of pace. Gets a little shuffle going despite himself, something that warms and loosens his tendons. The strings are like fence wire. Still, he bends and slurs. His wrist feels gritty with disuse but he manages a slim vibrato all the same. The guitar’s tinny, toy-like tone rings in his chest. Music. And it’s not hurting anybody”. Excerpt from “Dirt Music” by Tim Winton. 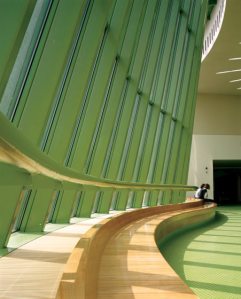 Recently, I heard Peter Hooke and his band play Joy Division songs at The Palais some 30 years after the songs were first released.  The music felt like it came straight from the workers at the factories of Manchester.  Grim and dark, mechanical and repetitive but with a layer of lightness that lifts the spirit.  The music was spatial, complex, energetic and loud – filling every crevice of the large auditorium.  It was compelling and intrusive.  The music had been constructed in response to something and somewhere.  Yet there was a softness that optimistically chimes in over the bleak orchestral backdrop.  This was especially apparent in their song “The Eternal” – the connection to architecture seems obvious to me.

If places inspires music how is this reflected in the work itself?  Brian Eno contemplated this when he composed “Music for Buildings” which was intended for late modern buildings such as Dulles airport by Saarinen. Aboriginal singing to country with its long deep incantations speaks to the vast spaces of the Australian landscape. Gothic cathedrals inspires the voice to rise and fill the elongated volumes – whereas grungy local pubs generate music that reflects the angst of urban life. In contrast, shopping centers feel like pop songs all shiny, clean and colorful.  Songs, music, architecture and dance are a way to map culture and place – it is a way to say, “I am here and I have something to say”.  When that voice is defiant it is a way to see the world in a different light. 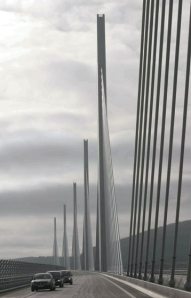 As an architect, music makes me consider buildings beyond functionality and to capture the allusive ephemeral quality through arrangement and adornment. Music does this so well and it is an aspect I see more clearly in well-designed objects and spaces.  In architecture, the composition of elements are arranged to evoke an emotional response to place.  The rhythm, the spaces in between, the distances and the tension or harmony between parts creates an experience through feeling and place. The textural quality of space, the way buildings envelope and the movement through a sequence of form placed along pathways can be like walking through a song. In the right hands, architecture, like music, can take hold – as Tim Winton writes – and therein lies its potential. 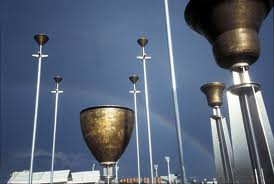